Definition and origin of cleanroom technology

A clean area is a “specified area in which the concentration of airborne particles is regulated and classified, and which has been designed and is being operated appropriately for regulating the introduction, formation and deposition of particles in the area.” (ISO 1464 41-1)

This area can be of different sizes. You do not always have to set up a complete cleanroom to protect the product from harmful particles.

The measures to be taken depend to a large extent on the process and the respective requirement. Frequently used solutions in cleanroom technology are minienvironments, cabin solutions, conventional cleanrooms, etc., which are selected and implemented depending on the required purity class and process specifics.

The product to be protected is always in the centre of cleanroom technology. Together with the process consideration and the requirements, the best possible cleanliness solution can be found and implemented.

The route to modern cleanroom technology

The exact origin is controversial in the professional world. Cleanroom experts agree that cleanroom technology became really relevant at the beginning of the 1960s. However, the new technology was initially considered as a niche product. In the course of the increasing efforts in the aerospace industry, in which cleanroom technology accounts for a significant share, the first standardization, the United States Federal Standard 209 (FS 209), was created in 1963. It did not take long until other sectors such as the semiconductor industry discovered the benefits of production under cleanroom conditions. Research institutions and companies from around the globe now relied on cleanroom technology. Therefore, a global standard needed to be found urgently.

In May 1999, the Institute of Environmental Sciences and Technology (IEST) presented the internationally recognized standard ISO 14644, which, on 29 November 2001, replaced US Fed. St. 209 withdrawn on that day. In addition to requirements on the cleanroom, it also contains standard values for air purity quality and qualification. Through the continuous optimization of the ISO 14644 standard, today, even conclusions on planning, control and operation of a cleanroom can be drawn from it.

Cleanroom technology was also gaining more importance in Germany. The engineers of the VDI (Verein Deutscher Ingenieure, Association of German Engineers) dealt more frequently with the issue of cleanroom technology and developed their own national standard – i.e., VDI 2083.

The standard families ISO 14644 and VDI 2083 are equal standards for cleanroom technology. ISO 14644 is considered an international standard, while the VDI standard derives from the standard work of the VDI and, therefore, has a national character. 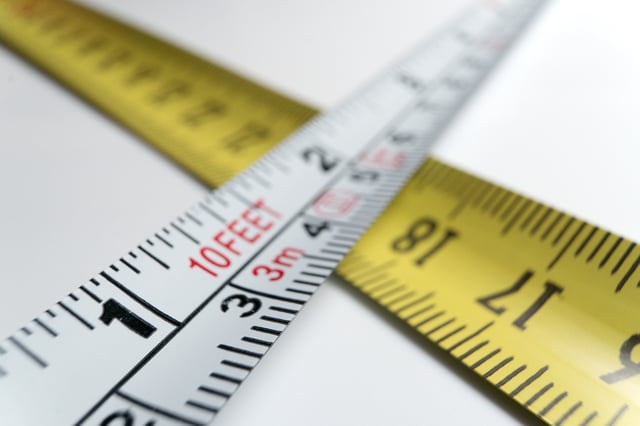 Since VDI 2083 represents the world's most comprehensive set of regulations with over 20 individual sheets on various aspects of cleanroom technology, other countries also adopt VDI 2083 or use them as a prototype to expand their own policies.

Important: VDI 2083 does not contradict ISO 14644 in any point but builds on it and amends it. The objective of VDI 2083 is to represent the current state of the art. It is continuously amended and COLANDIS also participates in a variety of single sheets. Because new challenges in projects sometimes require new standards in cleanroom technology.

For zero-defects with suitably clean production, you must always consider the entire process chain. If one single process link is neglected, process steps lose their effect and the product its quality.

Already during the production of single parts, assemblies or machines a high degree of cleanliness, which is defined in different standards, must be observed, because contaminations, existing hidden in a machine, will sooner or later affect the quality of the product which is manufactured on this machine. This is why, in addition to suitably clean production, part cleaning and also assembly and machine cleaning is of great importance.

A cleanroom is not always required to ensure suitably clean production. These costs can be saved if you understand the main processes of the chain and consistently comply with defined processes to protect the product optimally. But not only production under clean conditions and cleaning parts or assemblies are of great importance.

In a detailed report from practical experience, we explain how you can provide a clean environment in a machine. An intensive analysis of the relevant processes and interfaces is of great importance in this regard. Questions of cleaning, packaging, transport, environmental conditions, processing as well as the operating conditions at the end customer should be considered from the outset.

Cleanroom technology – saving money with the circle of performance

Cleanroom technology is often referred to as enabling technology or cross-sectional technology and considered a sheer cost monster. However, it is a very essential topic for many processes. Whether a company has a clean room or not plays a subordinate role at first. The company wants to sell products first and foremost. Action will only be taken when products can no longer be sold because the quality suffers under the current environmental conditions or also because customers require production under clean conditions. 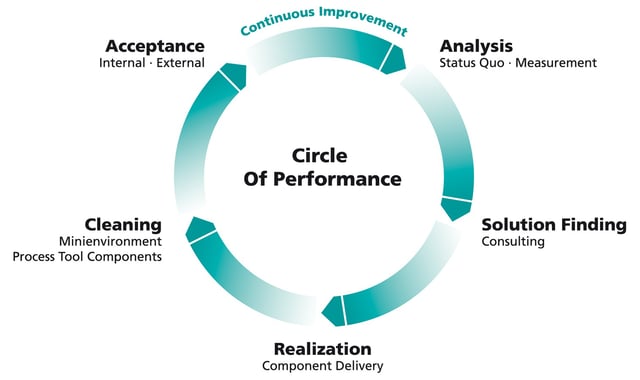 The circle of performance helps you get the most out of the following criteria:

Contaminations can only be avoided if you know the sources of contamination:

Many particle sources and different product requirements should therefore be observed prior to planning a clean environment. Different ambient conditions require different cleanliness solutions. Such solutions can be:

According to SEMI standard “SEMI E44-95 Guide for Procurement & Acceptance of Minienvironments” minienvironments are defined as follows:

“a localised environment created by an enclosure to isolate the product from contamination and people.” The ambient conditions (e.g., air purity class or temperature) can be clearly defined for the process area and thus meet required conditions for a specific work step. The physical limitation allows bringing about the necessary conditions more efficiently and keeping them consistent. In addition, such a minienvironment solution is often a more cost-effective and space-saving alternative as compared to a conventional cleanroom.

Laboratory, manufacturing, assembly or test tasks can also be performed with a clean air workbench at relatively low cost. Similar to a minienvironment solution, only sub-processes can be supplied with clean air and thus costs can be saved. 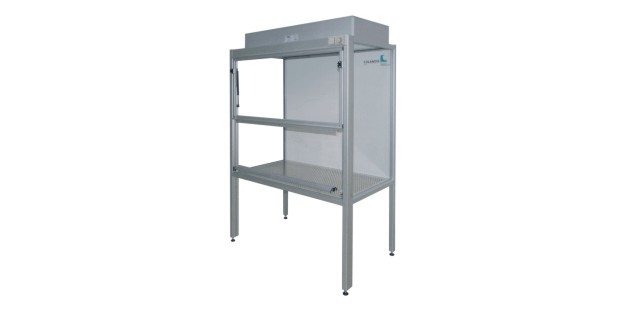 Another small local solution for a sub-process with specific cleanliness requirements is a mobile cleanroom-box. It is mobile and also suited for measuring and testing tasks. This solution allows avoiding contamination by airborne particles in a specific environment.

However, you should not only consider the subsequent process steps when choosing the cleanliness environment since products can often not be further processed directly and must be stored for a certain period of time or be transported from one clean environment into another. However, extensive logistical efforts are not necessary. 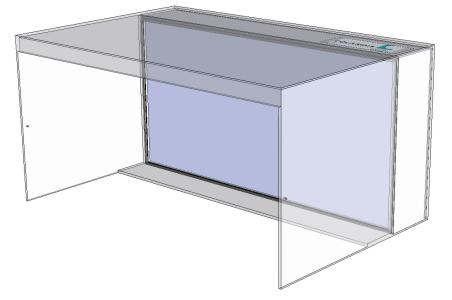 Storage and transport under cleanroom conditions

Transport and storage under cleanroom conditions are extremely important for highly precise and sensitive products. Therefore, the demands on companies and suppliers in the high-tech industry to also have these process steps under clean conditions are continuously increasing. Critical components can be damaged already after a short period of time as soon as they are exposed to normal ambient air conditions.

A clean air purged trolley is suitable for internal transportation of materials in a highly clean atmosphere. A fan-filter system in the trolley ensures the supply with clean air of all the components, and it is suited, for example, for transport between two cleanroom areas.

Cleanroom technology is gaining importance in more and more economic sectors. Therefore, also cleaning of different products or assemblies should be carried out under clean conditions. COLANDIS, for example, also has equipped its service range with cleaning under clean ambient conditions.

But what are the sectors in which clean environments are being used?

It has become apparent that clean environments are gaining importance in more and more fields. In this regard, it is especially important to know the processes of the customer and thus find the right solution. Because a large cleanroom is not always necessary. It is often sufficient to provide only sub-processes with clean air so that the products are protected against harmful contamination in the best possible way.

Do you have questions about our services or would you like to request a quotation? Our experienced staff will be happy to advise you!

Simply fill out the form below and tick the box for the products you are interested in.

The latest from our blog